After any season comes to an end, I like to reflect back and think about the things I could have improved upon, tactics I could have changed or mistakes that I made due to any one of a number of reasons.  As previously mentioned, this website is to help other hunters and fishermen in their journeys.  There are people reading this who may be beginning, some that have a similar skill set to me, and some that could probably do this entire thing much better than me.  The point is, as you read these posts, just remember that no matter what skill level you are at, we make mistakes and there is always room for improvement.  If you find just one thing that you can improve upon after reading through my successes and failures, I will feel that I made an impact and helped someone get better at what we love to do.

I will update a different season over the next week or so to keep the posts simple and fairly short.  I will also provide a brief grading system on how well I thought I had prepared and executed during each season along with an explanation to the grade.

This was my first season hunting turkeys.  I was only able to make it out once, however my buddy and I made the most of our opportunity.  We were at one of our leases on the Eastern Shore.  The email chain between the members of our lease wasn't looking promising as group after group failed to put a bird down.  My buddy and I decided to give it a shot.  I researched decoy combinations, calls and tactics which I thought would help us out.  I purchased a mouth call about 2 months before the season started and kept it in my truck.  I would watch videos at home and practice every time I got in my truck to drive to work.  By the way, I would recommend this method to learn for any call and for any species.  It is a great time to practice, even if you do get the weird glances at stop lights.  We got down to our lease before sunrise and set up with a jake and a hen decoy, hoping for the best.  After about 20 minutes, we decided that my calling sounded slightly better than his and I would take the lead.  Several hours passed and we had halfway given up.  We decided to put out some trail cams and slowly make our way back to the truck.  A few clucks here and a few more purrs there, we heard that sound I'll never forget.  A gobbler screaming his head off at about 100 yards away.  Both of us looked at each other, grinning like kids on Christmas morning.  This look could also be confused with a look of "I can't believe something actually answered us".

As we crept through the woods, we could tell the gobbler was out in the field.  At first, we couldn't tell why or explain the reasoning behind him answering every call I made, but not entering the woods to find us.  Eventually, we were able to get eyes on him and saw he had a hen with him.  He wanted a chance at whatever he heard in the woods, but was not willing to leave his hen alone in the field.  Now, everything we had done up to this point and what we were about to do, was a complete shot in the dark.  Our next step was to try to cut him off along the field line.  We moved slowly at a 45 degree angle through the woods and set up our decoys along the edge just as we saw his bright red head turn the corner.  He had been answering every time I called out to him.  Still at about 75 yards when he turned the corner, he saw our crude decoy setup and made a beeline straight towards it with his hen in tow.  Matt had a great angle and when the gobbler got to 30 yards, he made the shot.  The gobbler back-flipped as the hen went screaming into the woods.  Those few moments seemed to blur by, however, as I write this post, I can relive the entire thing crystal clear.  We had succeeded!   After a few "trophy" shots and a selfie with the turkey (you did read that correctly),  we called our friends and headed home.

Preparation- B.  I felt that I had prepared just enough to be considered "dangerous" to a turkey.  Heading into the season, I had watched a ton of videos, read various articles on the National Wild Turkey Federation website and practiced calling as much as I could without annoying my wife too much.

Execution- A.  While I was not the one who made the shot, I feel that our first attempt could not have gone any better.  We were somewhat confident, although not to the point where there would be any disappointment had it not gone the way it did.  We also had a great attitude heading into the hunt and anybody that has ever spent time outdoors knows this is an easy feeling to have. Matt with his first bird. 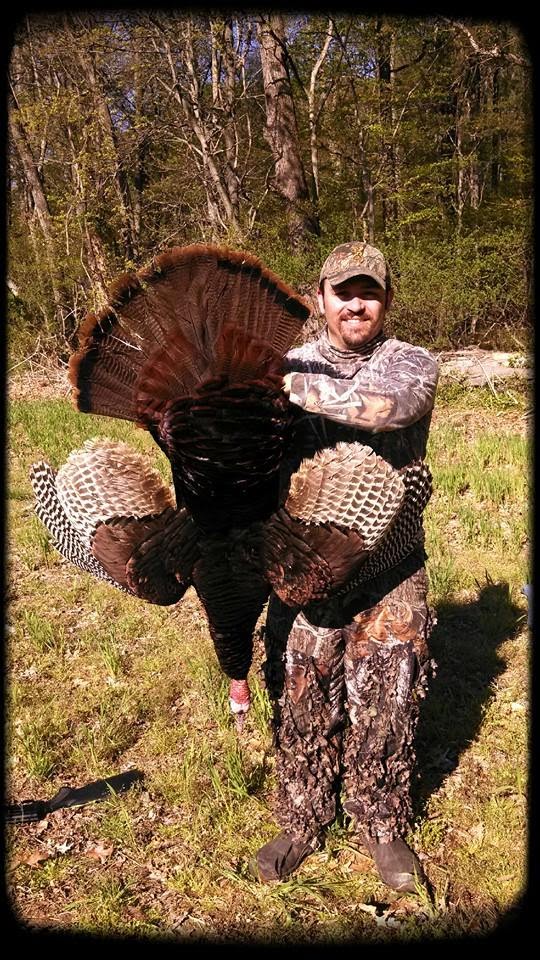