Oh, The Weather Outside...

It's funny how weather can change from year to year.  I just started this blog style format and was reading through the old fishing reports as I switched them over from the last website to this one.  From year to year, weather can change somewhat drastically on the same date.  Below is a fishing report from March 29th, 2013.  As you can see, it was over 50 degrees and pleasant.  The water levels were somewhat high, and the water was stained, but we were still able to fish.  Last year and this year have been quite the opposite.  A late snow storm in 2014  added runoff and turned the rivers into chocolate milk until mid-April and this year looks to be about the same.  I distinctly remember fishing the Monocacy two years ago and the success we had finding fish in deeper holes.  With light snow showers throughout the day yesterday and a high temp of 42 degrees today, I know for certain I won't be repeating those same successes.

One thing is for certain, sooner or later Old Man Winter will release his grasp and I will be out fishing the waters I love so much.  With forecast temperatures in the upper 50's for most of next week, the fish will continue on to their normal business.  The only undecided factor is if the fish will cooperate when I get out there. 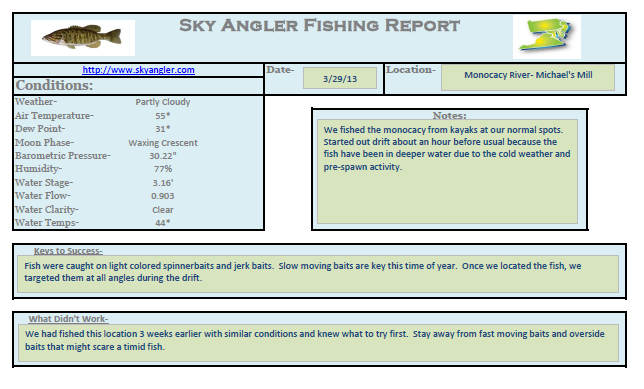 Sean
Posted by Sean Coleman at 7:00 AM